This month we introduce you to a portuguese gin – Sharish Blue Magic Gin – produced in Alentejo by António Cuco.

The idea to make his own gin struck António in September 2013 and by October he was working on his first gin recipe, tinkering away with botanicals on a pressure cooker in his kitchen. Despite the relatively crude methods, 15 litres of Sharish Gin was being sold each week. By 2014, António was a certified distiller and before long Sharish Gin was being made in a much more refined manner – now in traditional portuguese 300 litre copper pot stills.

Somewhat a jack-of-all-trades, António also has a 16,000 square foot estate in which he cultivates oranges and lemons – both of which are picked, peeled and transformed magically into spirit by his very hands. The other local botanical is apple, Apple Bravo de Esmolfe, to be precise – they’re a matter of Alentejo pride and, along with the orange peel, lemon peel and lemon verbena, are macerated when fresh. The rest of the botanicals used in Sharish Gin are juniper (from Macedonia), coriander, cinnamon, cloves and bourbon vanilla.

However, Sharish Blue Magic Gin has an extra “magic touch”! One of the key botanicals in Sharish Blue Magic is the Butterfly Pea plant. The blue pigment which comes from the Butterfly Pea during the distillation process changes with alterations in pH level (i.e.: with the addition of acid or alkaline). In the instance of gin and tonic the tonic water contains citric acid which when added to the gin alters the pH level and therefore turns the drink from blue to a light pink.

We love the story behind this gin and its producer. The colour change may be novelty but it’s not just a gimmick – we really enjoyed the acidity here and felt it improved even more when we added the orange peel. To that end, we choose a bar of Seville Orange Dark Chocolate from Aine’s Chocolates based in Cavan, to enjoy with your Sharish gin. And we have paired it with Franklin & Sons Mallorcan tonic, to create a delicious Mediterranean G&T. 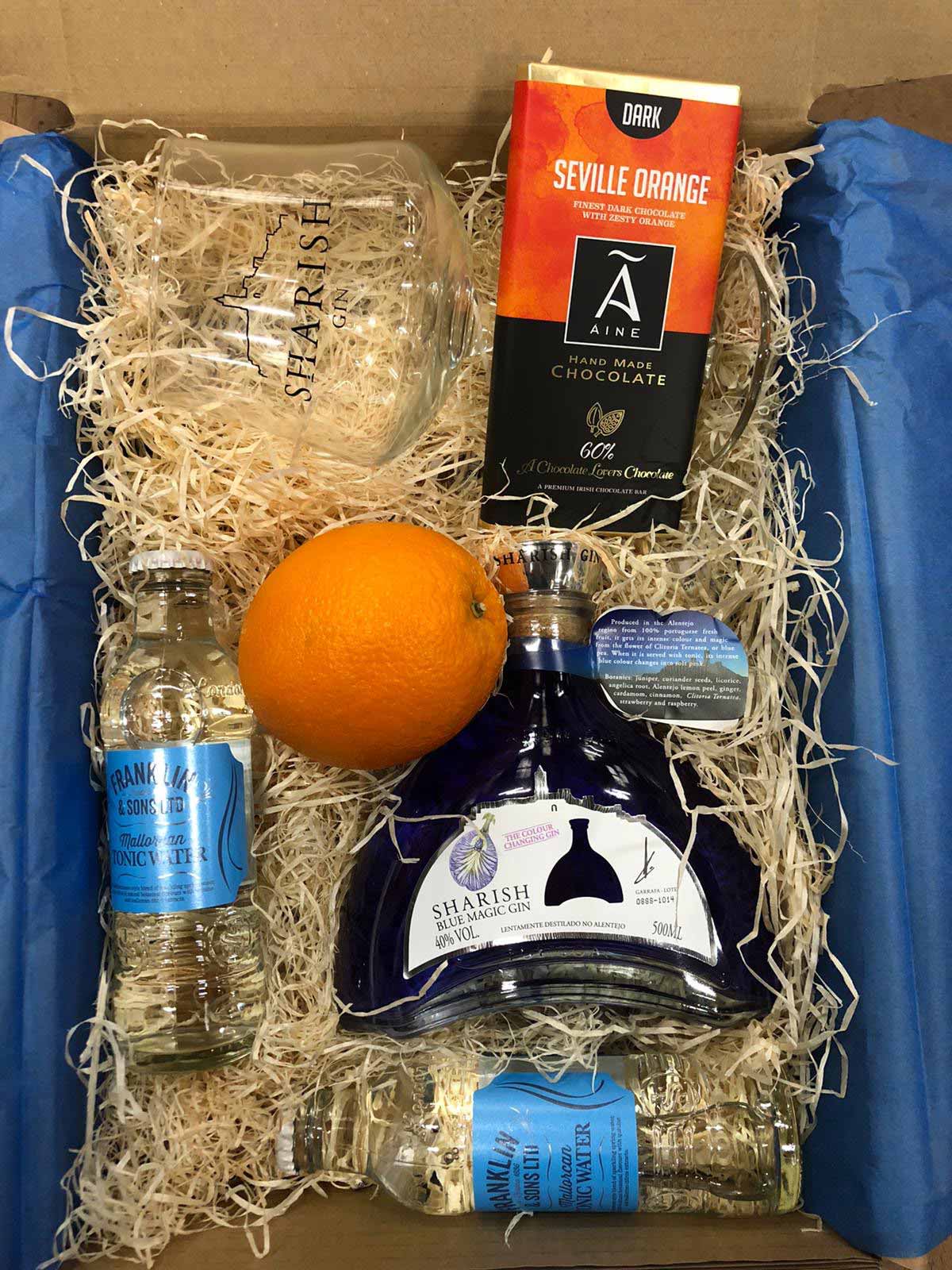 GIN SHARISH is a smooth gin with a unique aroma. Great citrus flavours from the orange and lemon zest and a sweet flavour from the Bravo Esmolfe Apple and from the vanilla. The juniper it’s also easy to identify considering the softer notes of cloves and coriander seeds. At the end we can taste a little spice coming from the Lemon verbena.