This month it’s about Irish. Your box is filled with all Irish made & supplied goods.

A great book to read, if you get the chance is ‘Blazing a Trail, Irish Women Who Changed the World’. One such fearless leader who features in the book is Ireland’s legend Pirate queen Grace O’Malley, or Grainuaile as she is better known in Irish folklore.

She was a fearless leader of land and sea, from Clew Bay in Co Mayo. In 2007, Co Mayo man Steven Cope wanted to pivot his career. He had Worked for Lir Chocolates for 15 years, but it was time to fulfil a lifelong dream to create his own whiskey and Gin.

After reading Grace O’Malley’s story, it was obvious who he would pay tribute to on every bottle. And so, after 10 years of planning through an economic crash, Grace O’Malley Spirits was born in 2017.

Grace O’Malley Gin is blended and distilled at the Great Northern Distillery in Dundalk. Stephen employed Bordeaux Master Blender Paul Caris who now works exclusively for Grace O’Malley . Having visited Clew Bay, Paul wanted to infuse the natural heather found across the bay, into their Gin, and it’s now available internationally as ‘heather infused Irish Gin’. There are 14 botanicals in all, made in a traditional style and these include rock samphire, red clover and wild thyme. Stephen wanted us to share with you his blended Whiskey as well, so you’ll find a miniature to try, for later, when your gin is done! 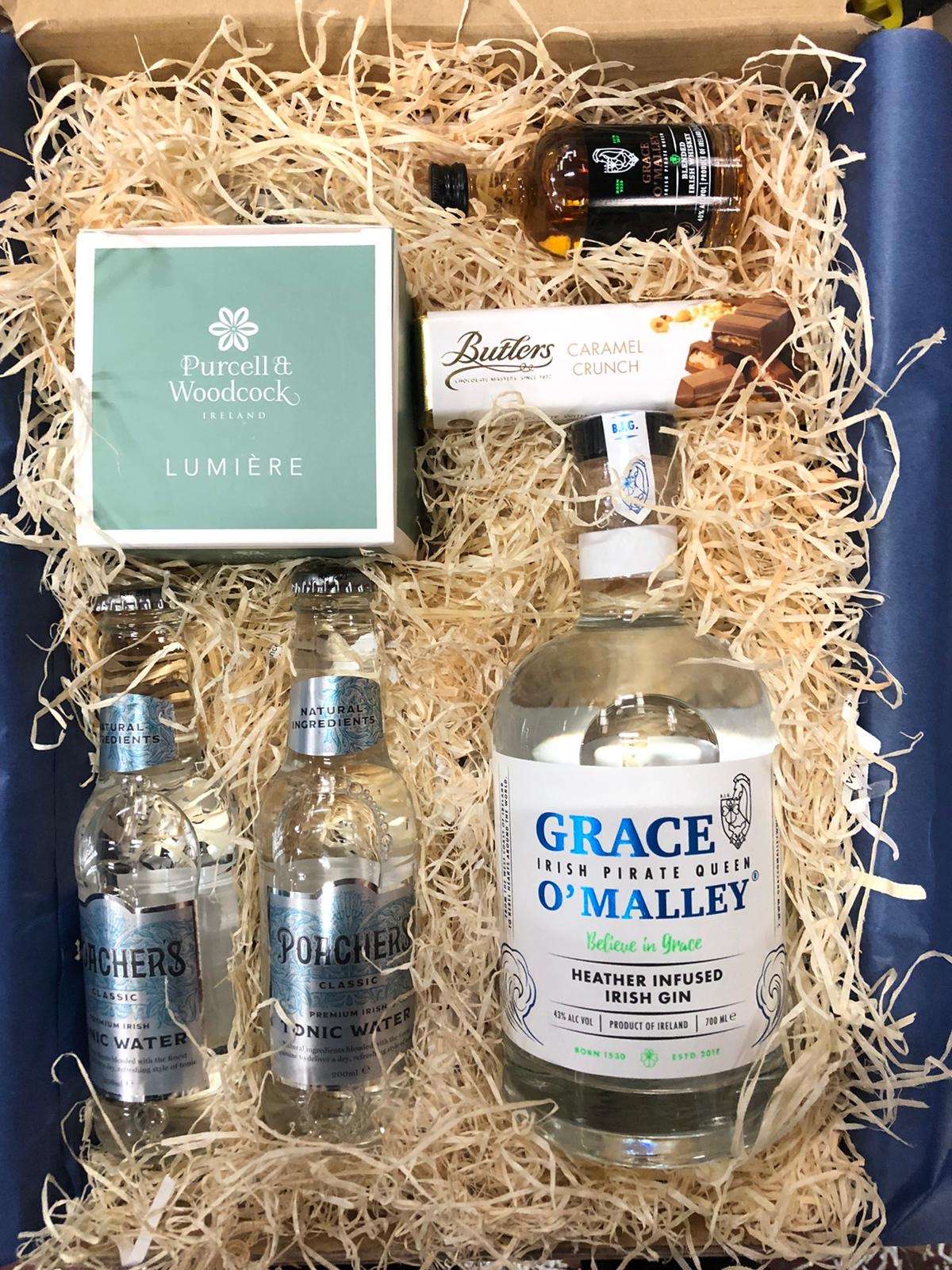 When you do get around to opening Grace O’Malley Gin, take 5 minutes for yourself. We chose to include a handmade Irish candle from the ‘Lumiere’ range, by Purcell & Woodcock. Lumiere, they say is the meaning of light. A luxurious fragrance bursting with incredible energy. A blend of crisp bergamot, lifted by cool marine notes with a heart of rich sandalwood. It has rich musky fragrance, it will add a touch of elegance to your home and warm your soul – exactly what we need at the moment!

The guys at Poachers tonic in Kilmuckeridge Wexford have worked with a perfumery to extract fresh Irish rosemary. This is added to the water to give it a beautiful herbal taste and aroma. Sugar beets and Florida orange are then carefully blended to give Poacher’s its citrusy sweetness. Finally, natural quinine and botanicals are infused to give the tonic its essential bitter notes.

Lastly, we include a small treat from Butler’s Irish Handmade Chocolates. A Caramel Crunch Chocolate bar, for when the gin is done, the whiskey is gone and the kettle is on. From our team to you and yours, thanks for being part of the Gin Box, and stay safe this month.

We tried this with Lemon and with Grapefruit and the Lemon won out for us. With stacks of ice, keep this simple. It is a mediterannean styled gin with a lovely freshness to it, and that is enhanced, with the lightest squeeze of lemon and classic poachers tonic. If you want to go all out, peel a whole shard of lemon peel, twist it around a cocktail stick, and drop it into the glass. The wax in the peel will infuse.
Expect a refreshing, clean gin and tonic. Enjoy!